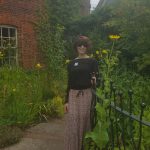 Following the completion of ‘The Norfolk Story Book’ in Summer 2016, Isabelle undertook a Writer in Residence position at Gressenhall Farm and Workhouse.

In this piece, Isabelle explains the inspiration behind ‘The Norfolk Story Book’, how she came to be on site at Gressenhall and her fascination with Workhouse history.

My first children’s book is inspired by objects in Norfolk Collections Centre, situated on the same site as Gressenhall Farm and Workhouse Museum.

The first time I set foot in Norfolk Collections Centre, just over a year ago, I knew that I wanted to write about it. An atmospheric cabinet of curiosities, the store is full of exciting objects; Snap Dragons, a Mammoth tusk and equipment used to make mustard and toffee, to name but a few. Even though the building was open to the public, there was a sense of secrecy in the air, almost as though you, as a visitor, had stumbled into the store by accident -which I believe, is a huge part of what makes the store so utterly unique and which certainly captivated my imagination.

Whilst in the completion stages of writing ‘The Norfolk Story Book’ I was delighted to be invited to the ‘Collaborate with Gressenhall’ day. This was a fantastic day in which Gressenhall staff and freelance creatives got together for a meeting of minds with a view to collaborating on creative projects. The day consisted of talks and activities, led by history professionals, which focused on the lives of people in the Workhouse, as well as discussions with creatives about the ways in which they could bring Workhouse history to life through collaborative projects in community spaces.

There was even a chance to touch and examine some of the museum’s objects; particular favourites of mine were some of the hand-made dolls. It was awe-inspiring to think of how many’s people’s hands had touched those objects throughout history and how these artefacts had played a part in people’s lives. It sparked some very interesting questions; who made them; who played with them; how were they made?

Naturally, I jumped at the chance to collaborate with Gressenhall and in February 2016, taught a day’s creative writing course on site in the Learning Centre. The course was an introduction to creative writing which drew inspiration from real-life stories and images in the ‘Voices from the Workhouse’ focussing on how to create character in the narrative. I was thrilled to receive five stars from everyone who participated on the course, in the evaluation.

I suppose it goes without saying that all this work and meeting interesting people had got the creative juices flowing!

I was keen to explore ways which would bring workhouse history to life for visitors at Gressenhall. The Writer in Residence position has enabled me to further research many of the real life stories of children in the workhouse. The aim was to gather ideas for an interactive display as part of Gressenhall’s ‘Collaborate’ creative exhibition in Autumn. Thanks to the new displays, I was hardly short on resources!

The ‘Voices from the Workhouse’ project beautifully highlights, through interactive displays, the many stories of real people who lived and worked at Gressenhall, from how they washed to what they ate and where they slept. In particular, I enjoyed listening to some of the audio interviews from Workhouse inmates, as well as the film clips of actors portraying Workhouse characters, which radiated with warmth and humanity and really brought home the fact that these people could have been you or me.

As a nature enthusiast, I was keen to make the most of my time on site and explore the Farm where I saw some beautiful Suffolk Punch Horses, piglets and chickens!

In the morning, my writer’s desk was situated in the staff offices where I could bounce some ideas at my computer screen and where I was introduced to that most vital of research devices, the staff photocopying machine which, in spite of its evident simplicity, I could never quite get the hang of!

In the afternoon, my writer’s desk was situated back where it all started, at Norfolk Collections Centre which was open to the public and I had the pleasure of chatting to visitors.

Having explored the collections at great length, I took part in the ‘Collaborate’ exhibition October 2016 in the chapel at Gressenhall. I created an interactive display which consisted of some of my research and writing, inviting visitors to imagine their own stories inspired by workhouse objects.

Responses written by children were pinned on the story board –

”The workhouse would have been dark and scary. I think children would have enjoyed the light and warmth of candles.”

”A wooden spoon is more to your imagination than any toy.”